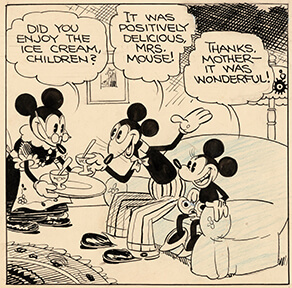 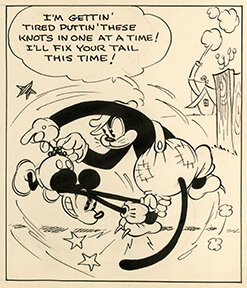 Earl Duvall (1898-1969) was an American artist and animator, best known for his work on Walt Disney’s Mickey Mouse and Silly Symphonies newspaper strips comic strips during the early 1930s. Duvall started his career with Disney as a layout artist and later as a member of the story department. Duvall was periodically an inker for Floyd Gottfredson on the Mickey Mouse daily strips 1930-1932 and he also drew and wrote the Silly Symphonies Bucky Bug comic strip. Upon leaving Disney, he directed a handful of animated cartoon short subjects for Warner Bros. Cartoons. We are pleased to offer items from Duvall’s estate, including his 1931 Disney contract (signed by Walt Disney) as well as the original art for three early 1930s Mickey Mouse daily strips, including the earliest Floyd Gottfredson strip art to have been offered at auction. All are fresh to the market and sure to please any Disney collector.