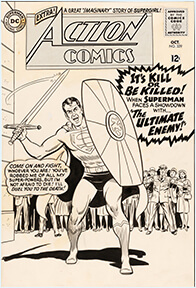 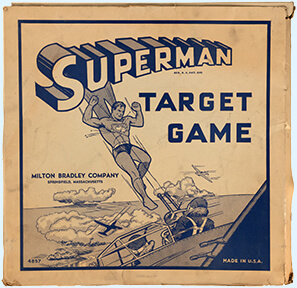 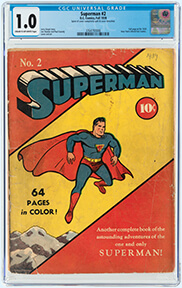 Superman soars again at Hake’s, with an impressive selection of Superman collectibles from the David Barsalou Collection. Barsalou began collecting comics in the Summer of 1961, hooked after purchasing Superman Annual #3 from a local newsstand, returning month after month for more adventures of the Man of Steel (even having to return home to rustle up some more change after the price jump from 10¢ to 12¢). He also discovered back issues, with Superman and Batman titles being among his favorites. In the early 1970s, Barsalou expanded his collecting interests, adding comic art during a time when the art form was not appreciated nearly as much as it is today. During the 1980s, he began filling in holes in his Superman comic collection as well as adding related Superman memorabilia. His collecting is directly related to his long-running ‘Deconstructing Roy Lictenstein’ Art History research project, which identifies the original comic artists whose art Lichtenstein swiped for his own projects.