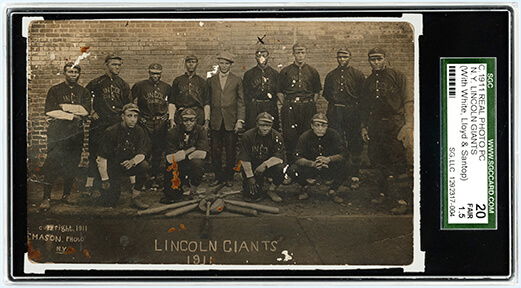 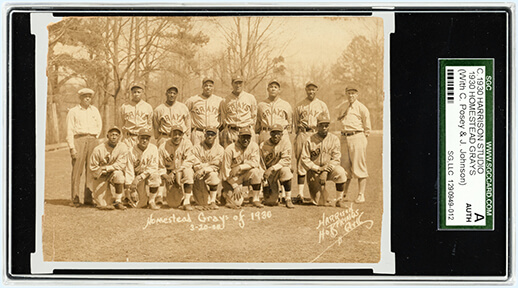 Hake’s Auctions is pleased to present the first installment of an amazing baseball memorabilia collection that was diligently assembled over a span of nearly two decades. This once-in-a-lifetime offering comes on the heels of Major League Baseball’s recent announcement that Negro League Baseball history is now officially part of Major League Baseball’s record books, including the lifetime statistics of over 3,400 players. Comprised not only of the most significant images representing a half century of Negro League Baseball in the U.S., this discerning group of treasures also includes a number of pieces originating from the Latin American countries of Cuba, Mexico, Venezuela and the Dominican Republic. With just over 30 items in total, quality and rarity surely trump quantity here as the theme of this collection centered around the acquisition of career contemporary images for all 35 National Baseball Hall of Fame selectees within the Negro Leagues category.

Highlighting this initial offering is the sole known surviving example of a real photo postcard depicting the 1911 New York Lincoln Giants squad managed by Sol White and picturing a very young John Henry “Pop” Lloyd along with a rookie ballplayer named Louis Santop, Hall of Famers all. In addition to this Cooperstown-bound trio, the Giants ball club also featured Dick “Cannonball” Redding on the mound and Spotswood Poles in the outfield. For the more traditional card collecting enthusiasts, an 1896-97 advertising trade card is offered here picturing the Page Fence Giants baseball club, considered by many to be the first great Black baseball powerhouse, led by future Baseball Hall of Fame candidates Grant “Home Run” Johnson and Charles Grant. Finally, if crystal clear photography is your forte, our 1916 Chicago American Giants panorama is not to be missed. In addition to featuring one of the great Black baseball dynasties of all-time, this treasure is highlighted by the presence of Negro League superstars: Rube Foster, Pete Hill and “Pop” Lloyd.

With the selection of other historic Negro League photos and postcards up for auction here, this is an event not to be missed as many of these rarities are unique and may never come up again for public auction. These incredible artifacts not only capture great moments in time from a sports perspective but they also portray an oftentimes unseen part of American culture during the first half of the 20th Century. The interest in Black baseball memorabilia has never been higher as it will now be possible to compare all-time greats from both the Negro Leagues and the Major Leagues during the pre-integration era.