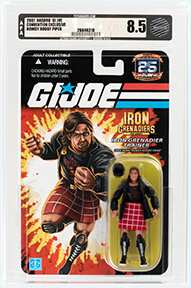 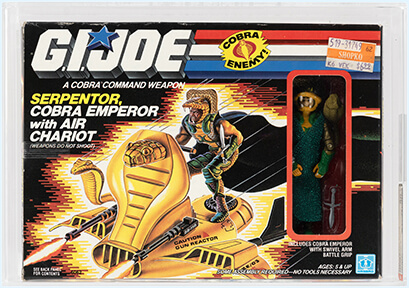 Brian Hess was drawn to the world of G.I. Joe as he joined his older siblings as a fan of the classic animated series and playing with the accompanying toyline, hooked from the moment he received the Mobile Command Center as a Christmas gift. He started collecting in 1988 (and still has a decent amount of his original toys) and counts G.I. Joe’s Anti-Armor Trooper Salvo as his favorite figure. After all, what’s not to like about a soldier whose chest is emblazoned with “The Right Of Might” and carries both a missile launcher and a briefcase? As for his favorite vehicle, it’s a tie between the Avalanche and Sky Havoc, as both toys featured versatility that provided maximum fun. Not just constrained to the ’80s and ‘90s Joes, Hess amassed an impressive collection of G.I. Joe toylines that followed as well. While helping care for an ailing loved one, Hess shifted his focus to more high end G.I. Joe pieces as a way to clear his head. Searching far and wide for those special pieces, he purchased items from all over the United States and around the world. Asked if he was more of a fan of the Joes or Cobra, Hess simply replied; “YOOOOO JOE”! While still a collector, Hess’s focus has “mutated” to another popular ‘80s/’90s toyline – Teenage Mutant Ninja Turtles – and so the chase begins again.