This item appears in these categories

Item Description
In spite of widespread opposition to the Viet Nam War and surfacing of the iceberg of corruption that became known as Watergate, Richard Nixon had a most successful campaign in 1972, sending Democratic Senator George McGovern to a landslide electoral defeat of 521 to 17.

Within his own party and in the early days of the campaign, McGovern demonstrated his strength and the organizational skills of his followers by winning one primary contest after another. The delegates who assembled for the Miami Beach convention were largely new faces drawn from a coalition of interests that included: suburban liberals, former Kennedy and McCarthy followers, students, feminists, peace people, and black and Latino activists. The 1972 convention was a revolt against the 1968 Chicago convention. As 'Newsweek' magazine reported: "This Democratic convention repudiated Hubert Humphrey, ignored Edmund Muskie, offended George Meany, denied Richard Daley a seat, hung Lyndon Johnson's picture almost out of sight and opened the hall and the party to a generation of irregulars."

McGovern's triumphal nomination was suddenly damaged by the disclosure that his running mate, Senator Thomas F. Eagleton of Missouri, had once been under the care of a psychiatrist for severe depression. After a delay that stalled the campaign, Eagleton resigned and was replaced by Sargent Shriver, a Kennedy family brother-in-law and former head of the Office of Economic Opportunity. McGovern's progressive proposals found little support in the national electorate, and he won only seventeen electoral votes from Massachusetts and the District of Columbia.

Many colorful and well designed McGovern buttons were issued for the primaries he entered and the national election. None of the McGovern and Eagleton jugates promoted as collectors items of the future were issued while Eagleton was still on the ticket. Only a few official Democratic party name buttons and a tab were in use before the question of Eagleton's health arose.

This collection of 21 McGovern buttons includes the authentic and briefly issued "McGovern/Eagleton" name made by Votes Unlimited along with its "McGovern/Shriver" replacement. Other buttons display symbols and/or text related to groups and issues such as women, ecology, children, labor, the National Democratic Committee, blacks and the "McGovern Million Member Club."

Sizes range from 7/8" to 2-1/4". The 7 litho tin buttons may have tiny, essentially unavoidable, traces of paint wear but remain Excellent to Near Mint. The 17 celluloid buttons are essentially Mint. The group is an ideal size to frame as is or will provide a base collection to be expanded on. Individually, a conservative value for this group is in excess of $100.00. Our special price is $65.00.
Pictures (click images to zoom in) 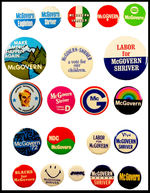