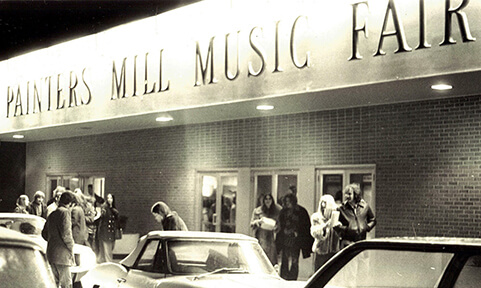 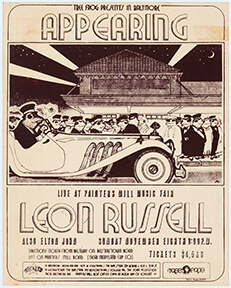 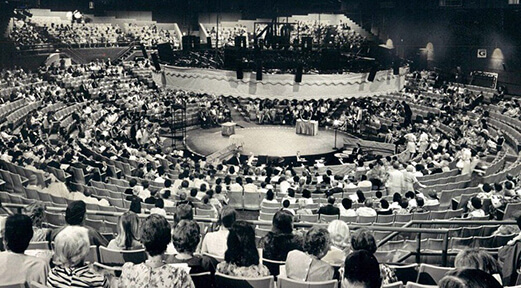 The Baltimore suburb of Owings Mills, MD at the dawn of the 1970s saw a rag-tag group of hippies, under the moniker Tree Frog Productions, take a trust fund and turn it into a 16 month party promoting concerts at Painter’s Mill Music Fair. The venue was constructed for theatrical plays featuring a revolving stage for productions in the round. “It was kind of the area’s version of what was happening at the Fillmore in San Fransisco” says Ron Nix, a regular attendee and collector who had the foresight to preserve a selection of posters produced for advertising the infamous concert series. Tree Frog Productions started the series with a show headlining Leon Russell and a relatively unknown British piano man, Elton John, as the opening act. “I was there to support my friend’s venture and was a fan of Russell, I didn’t know Elton” says Nix adding “The show was only about half sold but everyone was treated to an unforgettable night, Russell was brilliant and Elton had everyone dancing.” Another memorable show for Nix was the James Cotton Blues Band on New Years Eve 1970 which included “Free Breakfast” as part of the ticket price. “I was looking for an interesting night out” Nix says, continuing “Everyone got snowed in, it was the perfect makings for a grand party. An exceptional show, I recall some ‘spiked' apple cider and by breakfast things were a blur.” Hake’s is excited to feature a selection of these rarely offered psychedelic posters from Nix’s archive.